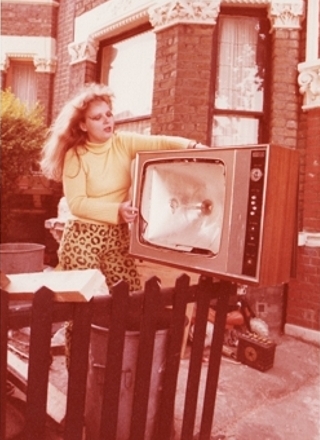 started singing at the age of 2....
later was occupied with the recorder and a little bit guitar
tried to sing in bands
auditions for rock/punk vocalists in the Bonn-Aachen-Cologne area in 1977/1978
nothing much came of it...
moved to London
formed 'Necessary Evil' with Zuni in 1979
Line-up:
Stef: vocals, 2nd guitar
Zuni: drums
Leslie/TRISH: bass
Fran: lead guitar

A few months and a few gigs later the band split up due to political, personal and musical differences.

recorded the single: Normal/I`m free/Allergy in 1980 at Street Level Studios, London
one Peel session in 1981 - no recordings available to my knowledge of this...
recorded with Robert Crash: Paranoia, Life-No and Dreams in 1981, released on the 'Scaling Triangles' EP
also with Robert Crash recorded the cover versions: 'Schöner fremder Mann' and 'Darling, let's have another baby', single released in Germany on Zick-Zack

Releases:
I hate being in love on MAKING WAVES LP (girlfriend records, 1981)
Words fail me + interview, The English Programme, Thames Television, 1982
bits and pieces on tapes, to be re-discovered...